Why we care about culture

Broadly speaking, culture sets out the basis upon which we all relate to each other and the basis upon which we build our own identity. The more encompassing our set of values, therefore, the more firmly based our societal views. Only in a well ordered society can human endeavour flourish. Achievement marks out people and gives them both purpose and meaning.

It is through refined culture that we extol the wonders of life, proclaim its gifts and care about each other. Culture needs to be nurtured, so that young people are not left unprepared – each one having somehow to work out a separate code of behaviour.

Find out more about Aspects of Culture in Ireland

How is culture related to our Ecotour?

Celtic culture, called Gaelic culture in Ireland, is one of Europe’s oldest. Gaelic people could find common cause with the French and Germans in times gone by. Here, we call to mind these historic bonds and strive for their renewal.

Both Gaelic culture and our common environment are threatened. The ecotour, through a pristine Gaelic homeland and surrounds, both helps to defend its way of life and heightens environmental awareness. Our ecomessage considers future governance and environmental management. The principles put forward foresee a broadly based, unencumbered, free market for ideas on the public administration of critical issues.

Assisting a threatened community and promoting the environment together define true ecotourism1. In positive terms, let us recall past friendships and join in a new cause.

Ecomessage – Reaching out to you

Behind the Tour – the historic Bonds

Explained in our Research Papers and demonstrated in our videos, the Irish-German link goes back to after the last Ice-age. Early Celtic and Germanic tribes migrated together from the Urheimat (the original Indo-European homeland) to Central and Western Europe. The connections in language are a testament to this.

After the fall of the Roman Empire, Gaelic Ireland sent forth its monks and scholars, though France and Germany (and further afield). Motivated by a love of the Almighty, they engaged in education and practical works to restore cultured civilisation.

In the 1600s, Gaelic Ireland (ever without a steel industry) bowed finally to conquest by arms. Irish nobles fled to Europe from a land laid waste. They joined the armies of great houses in France and Germany, where possible to continue their struggles for Ireland, from the battlefields of Europe. 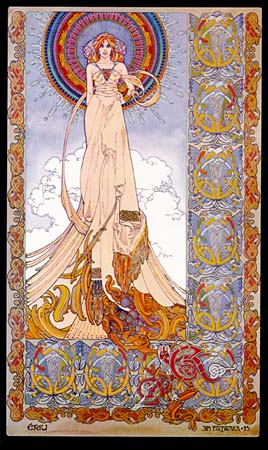